We originally published this article in 2014, check out some more updated statistics directly from Reddit as of 2021 here. Also, read our blog post from February 2021 titled “Why Your Brand Shouldn’t Use Reddit” to get our take on why brands need to change their view on what they can “get” out of Reddit.

A 2011 survey by reddit and 2013 survey by the Pew Research Center both confirm reddit’s predominantly young adult male demographics. However, these trends don’t necessarily apply to all of the 400k+ subreddits within reddit, as there do exist subreddits targeted toward female and slightly older audiences.

In mid-2014, reddit posted traffic and demographic information to their media kit page, shown below.

In September 2011, reddit announced the conclusion of a demographics survey that began in July 2011. The data was publicly released, and supported prior speculations of the average redditor being “a 20-something American male,” but also provided data about education, marital and relationship statistics. Below are results for the 20,978 U.S. respondents to the survey (there were 11,778 other respondents who didn’t list their current country of residence as U.S.).

In July 2013, the Pew Research Center published results from a nationally representative (U.S.) phone survey on reddit demographics. It too confirmed the high representation of young adult males on reddit: “young men are especially likely to visit [reddit]. Some 15% of male internet users ages 18-29 say that they use reddit, compared with 5% of women in the same age range and 8% of men ages 30-49” and also that reddit “is much more common among urban and suburban residents than among those living in rural areas.” 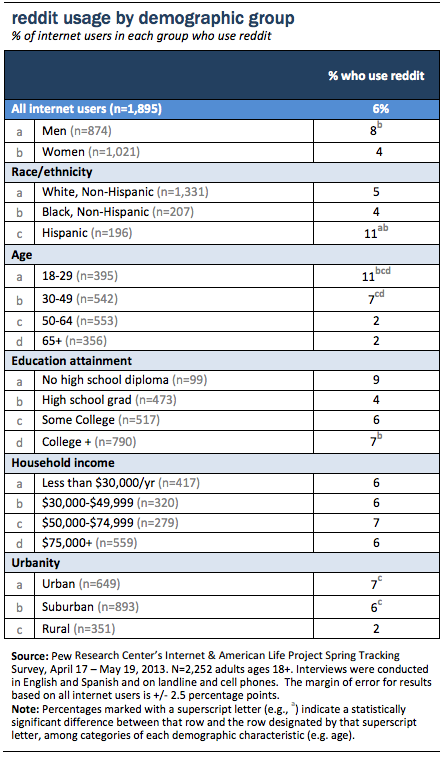 Occasionally subreddits will run demographics and interests surveys to give the community a better idea of its makeup, especially because the majority of reddit users are anonymous, and there’s no profile section for users to describe themselves. Searching reddit for “r/[subreddit name] survey results” will likely return survey results for that subreddit (e.g. “r/Europe survey results”), although the specific syntax sometimes varies.